2014.10.25 Mar Canet and Rafael Lozano-Hemmer participate in Digital Revolution at the Tekniska Museet, an exhibition like no other

Spanish artist Mar Canet and Spanish citizen Rafael Lozano-Hemmer participate in the exhibition Digital Revolution that will take place at Tekniska Museet starting on November 25th. The exhibition was first showcased at the Barbican Centre in London, and will be part of a five year long world tour.

Digital Revolution is an interactive exhibition presenting artworks that use contemporary technology as its main medium, from 1970s simple video games to state of the art visual effects from Oscar-winning Christopher Nolan’s Inception and Alfonso Cuarón’s Gravity.

How was the experience of working with Google?

The people from Google were very insisting in wanting to see the prototypes [and] in proposing ideas if something wasn’t clear to them while you were doing it. They helped us if there was any problem. We found that particularly interesting. In an art center, it’s not that they avoid helping us, it’s that they don’t have the tools to support a technological project.

The idea Google had was to inspire developers to do things, to open up their minds to things that they can do with technology, and there was the premise that the project had to be open source. There is also a web site called Devart where we have documented the whole process.

The art work at Tekniska Museet

As I have been told, Tekniska Museet usually doesn’t have art projects. So I think that it’s interesting that they have seen that they can overstep the barrier of being only a technical museum. If they start thinking about mixing art and technology, I think that it can be a plus for a museum because that’s what Art Electronica (Linz, Austria) did, and it has always worked very well for them.

What will the workshop you are going to do at Tekniska Museet consist in?

I think that it would be interesting to do a programming workshop that we prepared for the Barbican, which deals with coding. It’s for kids and teenagers to learn how to program butterflies. That way they can see the art work and say, “we can do that”. It’s an interface that’s online because Google designed it so that schools in England could use it this year [2014]. 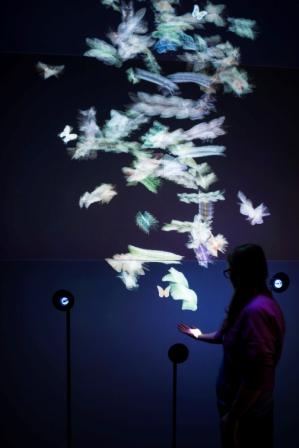 ← 5 Spanish nominated candidates for the Astrid Lindgren Memorial Award
2014.11.25 Conference on The (Re)generation of Spanish Cinema →